Dynamics 365 will do for ERP and CRM what Microsoft Office did for Word, Excel and Project?

By now, you have likely heard all about Microsoft’s surprising announcement to bundle their flagship ERP and CRM solutions with Office 365, Cortana Intelligence, Azure IoT and PowerBI under the Dynamics 365 brand.  Should we really be so surprised?

Microsoft has a long history in ERP solutions, but not nearly as long as their history in office productivity solutions.  Some would say they invented the concept, if not all of the components.  Today, well over a billion people use Microsoft Office around the world (according to Microsoft). That’s something like 1 in 7 people on the planet.  Man!

Check out these stats from OnMSFT.com:

How do you get to these numbers?  Is it that they make great products?  More innovation than the next guy? Do they have better sales and marketing skills?  They’re certainly not the only game in town, so why?

I would say all of the above are true to some extent, but blocking and tackling alone won’t catapult a company or product to the top of the market.  It is at least in part about a strategy that started long ago with Microsoft Office.

What is their secret and how will it impact Dynamics 365?

Again, not a surprise and not a secret.  Microsoft has always created great products that are easy to use, designed them to be interoperable then bundled them in a way that makes them a “no-brainer” purchase decision.   Microsoft Office, right?  They were the first to successfully bundle the basic building blocks of office productivity and market their way into the “market standard” position.  They certainly weren’t the first company to bundle products, but they definitely hit the nail on the head with this one.  (It didn’t hurt that these solutions were tied to Microsoft Windows and helped to popularize an interface that went beyond the keyboard to include the almighty mouse.)

I realize that I’m oversimplifying the impact and history of Microsoft Office, but I am doing so to focus on the fact that their strategy led Microsoft Office to a position as the market standard.  The solution by which all others are compared.  Today, anyone suggesting to use an alternative solution must be able to answer the question: “Why not use Microsoft Office?”

Will Microsoft Dynamics 365 become the “Why Not” in the Business Solutions category?

Office 365, Microsoft’s answer to office productivity in a cloud world has performed extremely well, especially in the business world and interoperability within Microsoft Dynamics AX and Microsoft Dynamics CRM is considered a core feature of their design. Cortana Intelligence, Power BI and Microsoft Azure all work in concert to provide the breadth and depth we expect from Microsoft.

Bundle them, provide aggressive pricing models (or subscription in this case) and pour on the marketing.  In short, “release the Kraken”. 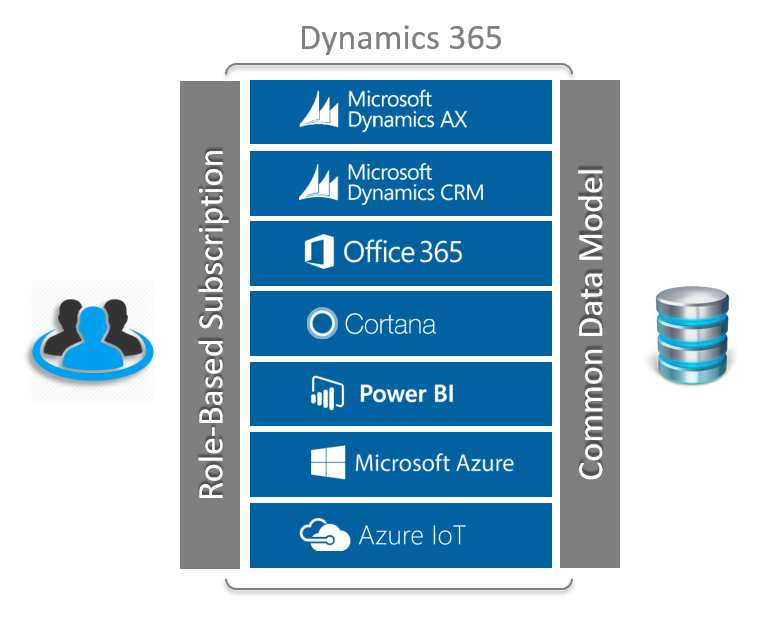 Let’s take another look at some of the Microsoft numbers in the ERP and CRM sectors.  These stats were shared by Jim Desler, Director Corporate Communications at Microsoft during Convergence 2015 (Microsoft’s annual customer/partner conference) according to ERPSoftwareBlog.

(shared by ERPSoftwareBlog in March, 2015)

Bundling these products makes absolute sense.  Now, of course, we expect that the millions of users working inside the 200 thousand plus companies already using Microsoft Dynamics are included in the billion+ count of Microsoft Office users worldwide.  This strategy of more formally connecting the solutions through a Dynamics 365 CDM (common data model) will set the roadmap on an even closer track for interoperability as well as cloud and mobile access.

As combined pricing and the user experience evolve in Dynamics 365, it is conceivable to believe that Microsoft’s market share in the ERP and CRM space will not only benefit, but could move towards a position as the standard by which other solutions are measured.  I believe in these products and Microsoft’s vision so maybe I’m jumping the gun a bit, but I will be watching closely and so should you.

Today, Robbie serves SBS Group customers in his role as Vice President, Enterprise Group where he provides thought leadership and manages the enterprise delivery team.  Robbie received his MBA in Business Administration and Management from the University of Georgia, Terry College of Business.
https://www.linkedin.com/in/robbiemorrison

Want to learn more about AXIO for Professional Services and Dynamics 365? Register for our webcast on September 13th at 2 PM EDT.