You may have heard—Microsoft Dynamics AX is officially retiring—prompting many on-premises customers to transition to Dynamics Finance & Operations in the cloud.

Sure, AX and D365 cover many of the same features and functions—finance, procurement, manufacturing—but AX migrants will find that a lot has changed.

The biggest difference between the two platforms comes down to infrastructure: AX is on-premises, Dynamics 365 is cloud-based.

But–there’s a lot more to it than that. 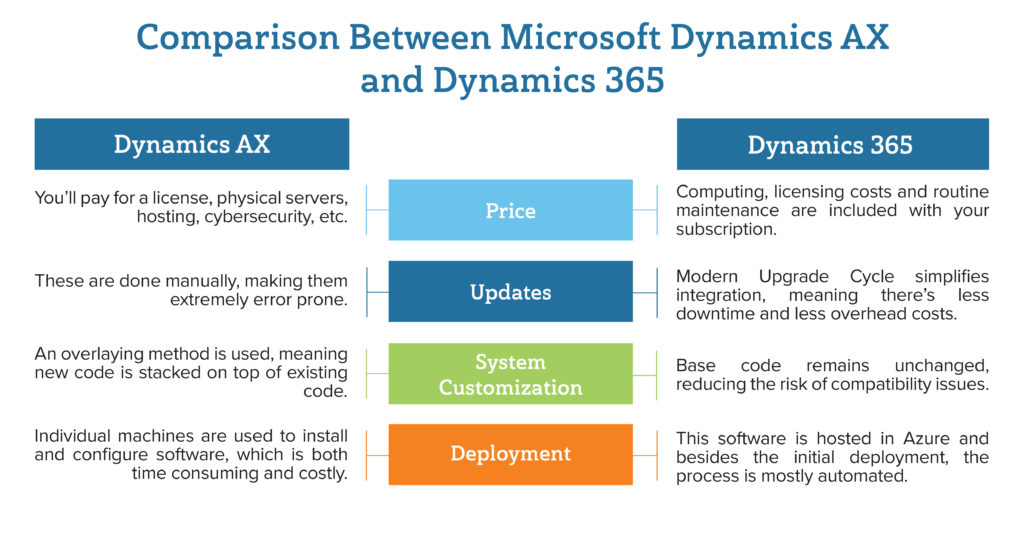 With AX, organizations pay for a license (possibly a physical disk, depending on the version) granting them rights to the software.

If you’re new to using cloud-based solutions, you might assume that you’re saving money by paying a one up-front fee–but that initial purchase is just the beginning.

“AX is a capital expense with the large upfront payment and annual maintenance vs. the Op-ex pay-as-you-go model.”

On-premises costs add up fast. You’re on the hook for physical servers, hosting, preventative maintenance, storage upgrades, cybersecurity software/monitoring, warehouse space, the costs of running equipment 24/7, and paying an entire team of IT pros to keep you safe and online.

“When you move operations into the cloud, computing and licensing costs are embedded into your subscription. It’s a way better deal, considering you don’t need to maintain infrastructure and host VMs.”

You’ll pay only for what you use on a predictable monthly basis, and you don’t need to deal with maintenance or upgrades.

One of the biggest differences between Microsoft Dynamics 365 Finance and AX is the way each system deals with updates and upgrades.

AX uses Application Layers that could be powerful, but upgrades are more complicated than they should be. Types of updates include hotfixes, cumulative updates, service packs, and feature packs and are applied manually.

Before installing an update, you’ll need to review the documentation released along with the latest version (it’ll be in the knowledge base). This will let you know your environment can support the update and how it might affect other applications/hardware/devices in that environment.

Still, even with guided instructions, AX updates don’t follow a linear path—especially if you’re using an older system with a ton of customizations.

Did You Know: Support for AX 2012 R2 and R3 are no longer available through Microsoft. Anyone still using this version is on their own in terms of patching, updates, and customizations.

While you can access the source code in the LCS knowledge base, manual updates are inherently error-prone–meaning even the most talented developers could introduce significant risks–with ripple effects in your digital environment and the real-world.

By contrast, Dynamics 365 operates on a Modern Upgrade cycle that leverages extensions instead of overlays to simplify integration and customization. Upgrades are smaller and more manageable, and there’s less downtime and overhead costs compared to on-prem upgrades.

The upgrade activity is performed by Microsoft and built-in testing tools and analytics support automated testing.

D365 upgrades are released twice per year (typically spring and fall releases). Since this changes the application functionality, it requires a code upgrade, full testing of the application and customizations, and a data upgrade.

Unlike Microsoft AX, Dynamics 365 automatically releases updates on a monthly basis. Users have the option to accept the latest version with the click of a button. Or they test the update in a sandbox environment first to ensure compatibility with custom code.

If you need some time to prepare your system or team for the latest feature release, D365 users can pause up to three updates in a row.

How Does System Customization Differ Between AX and Dynamics 365?

Another key difference between AX and Dynamics 365 is how each platform handles customizations.

With Dynamics AX, customizations are applied using an overlaying method, where new code is layered on top of the existing code, whereas D365 extends solutions via LCS.

While developing Dynamics 365, Microsoft rearchitected the code so that base objects could not be changed. In AX 2012 and earlier, users could modify the source code directly—but whenever MS released a hot fix or update, the new code would need to be merged with the custom code.

Now that the base code can’t be modified, there’s no need to merge code after hotfixes and updates have been deployed. You’ll still need to do some testing but overall, the process is much simpler than before. And it reduces the risk of encountering compatibility issues during the initial deployment or following an update.

At the same time, if you want to modify the base code, you’ll need to use Chain of Command (CoC) or Event Handlers to extend the code of your ERP system.

Director of Delivery, Sreenath Reddy Girigari says “customizations were pretty simple in Dynamics AX using overlays/overrides. Extensions can be somewhat challenging–especially in cases where we need to add the new code between lines of existing code.”

It is worth noting that the extensibility model only allows users to customize using built-in extension points. That means, if you’re trying to modify an object with no extension point, you may need to request it from Microsoft or develop a workaround.

Sreenath adds, “CoCs can’t help in every situation. We may have to deal with workarounds in D365 F&O using extensions. However, the upgrade costs and the code movements with the extensions is fairly simple in D365 FO.”

That said, the built-in limitations are largely a positive thing. It’s harder for teams to mess up existing customizations and easier to deploy new ones.

Velosio’s Sam Miller says one of the big benefits of moving from AX to D365 is that D365 democratizes the platform’s functionality. Small companies gain access to the same deep functionality as corporate giants.

“LCS is a big deal because most cloud solutions don’t offer such a comprehensive environment, and so is usability. Most other cloud solutions do not offer the ability to change the software as much. Custom solutions in the Oracle cloud, for instance, are far more difficult and make upgrading a bigger problem. Deep integration with the Office Suite, Power BI, and Teams is a big deal as well.”

How Does Deployment and Hosting Differ Between AX and Dynamics 365?

Sam describes the difference between how AX and 365 handle deployment and hosting as “apples and oranges.” He says, AX had this gigantic, thick client and required totally different deployment. D365 runs in the cloud.”

Dynamics 365 is hosted in Azure, Microsoft’s cloud service. And while you’ll still need to deploy the system to get started, the process is mostly automated—and there’s no need to buy install or maintain any physical infrastructure.

With AX, you had to install and configure the software on individual machines. Dynamics 365 takes installation out of the equation and uses point-and-click setup wizards to guide you through the process. This allows you to get up and running much faster than an on-prem implementation.

That said, while D365 makes it easy to install a fully functional system much faster than legacy solutions, you’ll probably want to modify the platform, so it aligns with your business needs. The more add-ons and customizations you need, the more complicated the implementation will become.

“In D365 Finance & Operations you’ll need to build your solution as a deployable package to deploy code/customizations to your runtime environment. Packages can be created with Visual Studio’s built-in dev tools or via automation processes available within build environments.”

He adds, “By contrast, Dynamics AX deployments can be made through XPOs, models, or model stores. If you’re moving between environments, model stores are used. Specific customizations or projects can be deployed using XPOs or a complete model.”

Does Microsoft AX Offer Any Advantages Over Dynamics 365? 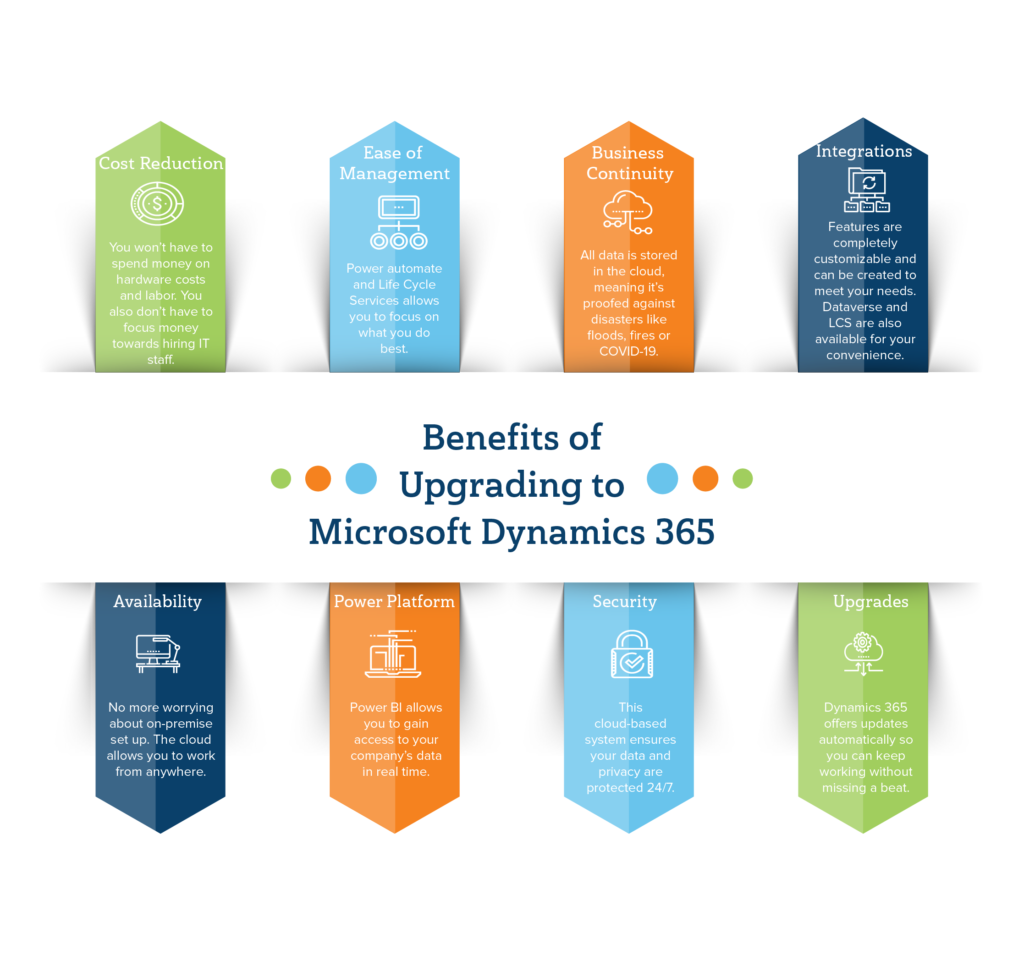 We asked our internal experts if they could think of any situation where Dynamics AX is still the best solution.

Spoiler: it’s not. The answer wasn’t surprising—given AX’s current status. Though, Velosio CSM, Lawrence Edwards sums it up best with a “hell no. It’s not even supported anymore.”

A few respondents did offer up some super-specific hypotheticals–all of which use AX as a last resort or workaround for dealing with a bad situation.

VP of Enterprise Sales Rob Urbanowicz says, “AX only makes sense if you’ve been acquired and are forced to move to a new solution in a short time frame.”

In other words, AX might make sense for teams coping with a rushed post-merger integration, poor change management strategy, or a lack of support from the company that bought them out.

“AX only offers an advantage in the case of remote site installation. Think-manufacturing or production companies located in rural areas with limited connectivity (ie: greater than 300 ms). In those situations, on-prem is still preferred.”

At the same time, this points toward issues like digital inequality and poor access—so, maybe it’s not that on-prem is preferred, just the only option.

Sreepathy adds “I’ve seen certain cases where organizations are very concerned about storing sensitive data in the cloud–that group still prefers on-prem. This will tilt the scale towards AX.”

In that instance, there could be a lack of awareness re: cloud security. It’s come a long way and now offers greater protection than on-prem/analog solutions but there are plenty of business leaders who fear change or stubbornly hang onto old beliefs.

AX is Retiring: What Next?

Microsoft agrees: it no longer makes sense for users to opt for an on-prem solution that in most cases costs more than its modern, cloud-based counterpart and provides fewer business benefits.

Now, it’s worth pointing out that AX is a solid tool with robust features, integrations, etc. still capable of supporting most day-to-day functions.

But it was built for a different era. AX launched in 2002—before smartphones, social media, and decent Wi-Fi.

And while subsequent versions kept pace with change, the limitations of its massive footprint and on-prem infrastructure now represent risks, expenses, and an inability to keep up with competitors.

AX mainstream support ends October 2021. And, if you don’t upgrade ASAP, you’re on your own when it comes to regulatory updates & non-security hotfixes. MS will continue to make the source code available via Lifecycle Services (LCS) and discoverable through Issue Search.

For more information about your available options read this comprehensive article about migrating Dynamics AX to D365.

As of July 1, 2021, Velosio is making a Fixed-Price Upgrade available to Dynamics AX customers in North America. Most importantly, we’ve built readiness, implementation and support services into a single turnkey program to reduce risk and lower the cost of upgrading.

SHARE
LEARN MORE
Field service providers can scale their operations in one of two ways. They can grow their workforce larger, so they can handle more new projects and service more customers. Or they can make operations more efficient, allowing them to perform more work with the same number of personnel. Since the current labor shortage will likely…
LEARN MORE
To truly understand what your customers think, it’s time to “ditch the crystal ball” trying to find the answers on your own. Instead, give your customers a “voice” so they can tell you themselves. That’s the only way to know for sure how they feel about your products and services and to determine the needs…
LEARN MORE
[class^="wpforms-"]
[class^="wpforms-"]
X