November PMI: Holding Up to History?

At this point last year, the Purchasing Managers Index (PMI) for November ended a streak of 5 straight months of growth with a drop off of 1.8%. This year, a strong November registered 57.3%, a 0.9% increase from October and a whopping 7.4% increase from the 49.9% rating in November, 2012. Usually, November trends downward, with the 7th highest in PMI average over the 66 year history of the index. However, with a late Thanksgiving (and Black Friday) 15 of the 18 surveyed manufacturing industries are showing growth.

This is the 6th consecutive month of growth in the manufacturing industry and the 54th for the overall economy. This is only the 5th time in history that the PMI registered 6 consecutive increasing months, and none falling below 49%, the last occurring from June, 1993 – July, 1994. This also occurred in 1987, from February – October, June, 1972 – January, 1973, and September, 1949 – July, 1950.  All of these periods were followed with at least 10 months of positive (50% or higher) manufacturing results.

There were no changes in trends, although Customer Inventories was making progress to the 50% growth line until November. The December PMI should have a similar impact as November, but perhaps at a bit of a lower rate. Historically, December fares better than November, but this (unexpected) significant rise in November may lead to only a small increase in December.

Regardless of what the future holds, manufacturing trends have been showing solid and expected growth up until this point. November was surprisingly positive and, while being cautiously optimistic, if December follows up on a strong note, manufactures and distributors should be getting prepared for a lucrative 2014. 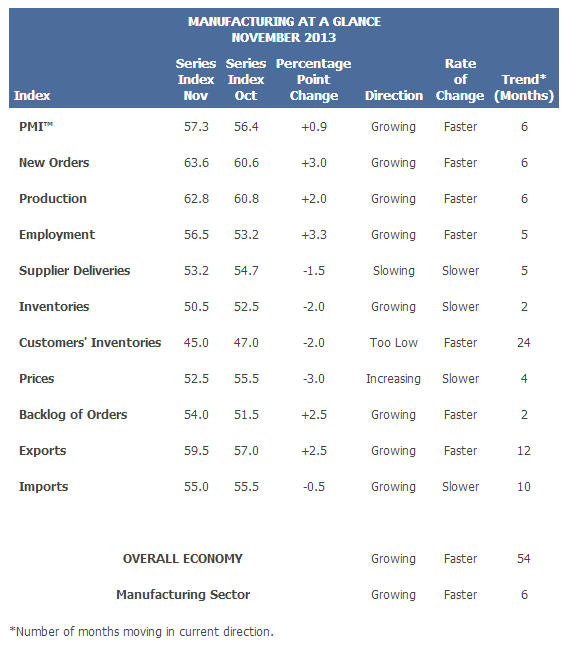