It wasn’t significant, but the economic activity in the manufacturing sector did expand in October, according to ISM’s latest Report on Business. Moving from a 56.2 index in September to a 56.4 index in October, this past month was the fifth consecutive month the industry continued to grow and the 53rd consecutive month of growth throughout the overall economy.

The Purchasing Managers Index (PMI) is a collection of 12 components that significantly impact the manufacturing industry and provide an accurate snapshot of the trends throughout the economy. On a scale of 1-100, managers from 18 manufacturing industries are surveyed and anything above 50 is considered positive. For reference, the index has not reached 60 since June, 2004 and was as low as 33.1 in December, 2008.

Driving growth in October were Exports (+5% point change), Customers’ Inventories (+4%), Inventories (+2.5%), Supplier Deliveries (+2.1%) and Backlog of Orders (+2%). Exports have now been growing over the last 11 months and has been a key factor in the recent success of the manufacturing industry with an index of 57. Only New Orders (60.6) and Production (60.8) have higher ratings on the scale, although New Orders only grew by 0.1% and Production had the second largest drop off of -1.8%.

Customers’ Inventories grew significantly, rising from a very low level of 43.0, to a manageable 47.0 on the index. However, this is the 23rd consecutive month that rating has been below 50, the longest trend by far, in either direction. In fact, even with the large growth, Customers’ Inventories remains the only component of the index that falls below 50.

With the manufacturing industry continuing on a steady, strong path, make sure to have a plan in place to capitalize. SBS Group has industry experts with proven solutions to help any manufacturing or distribution business. You can contact us for more information on the right solution for you. 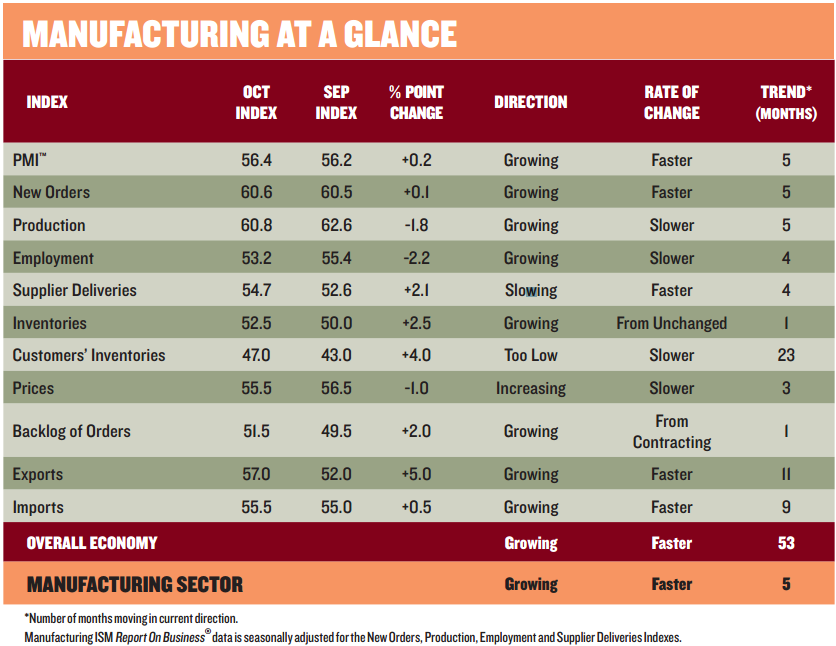