How to Score Leads and Opportunities in Dynamics CRM

I recently had a client approach me about using Microsoft Dynamics CRM in a newer way; that is to say in a way which I had not previously had the chance to use it before.  They wanted to use the system to score leads/opportunities. 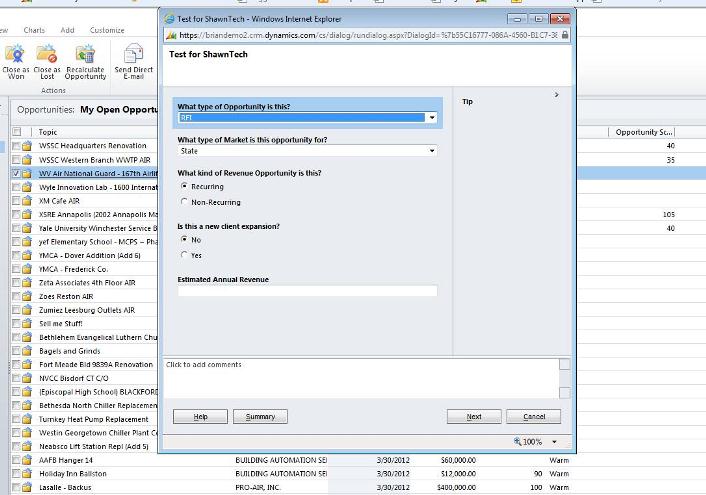 This client had a series of questions (many of which are mutually exclusive kinds of questions) and each of those responses would result in a different score. For example, if the sales person indicates this is an RFP, that’s worth 10 points, whereas if it’s just an RFI, then that’s worth nothing.

The Importance of Planning

When I initially took on the project, I thought it would be relatively simple, because you can use the increment feature in CRM with a dialog and just ask a series of questions and increment accordingly. This presented a few problems:

So the first issue is problematic if leadership wants to report on the data, but not insurmountable. The second issue is really a deal breaker to this approach unless we make the dialog very complex to take into account leafing back and forth. The better approach for my client (and I would imagine you, if you attempt to do this) would be to add the fields you’ll be asking the questions about to the entity you’re going to be scoring, along with a ‘score’ field. In this case I created an ‘Opportunity Score’ field on the opportunity.

Now, each time someone updates the prompt and response inside a dialog, all that does is update the fields on the opportunity even though those aren’t exposed on the form itself. Then, at the end of this process, I have a separate child workflow that gets kicked off that does all the scoring by using the increment function/feature. In this way, I can make the users complete the process before trying to score it. 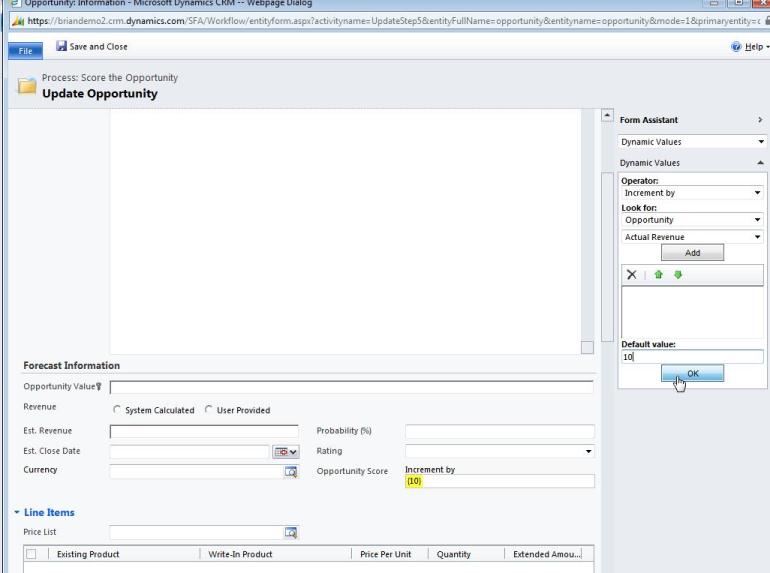 Things I learned along the way

Especially when you have novice users that might want to run through a process like this a couple of times, it’s not obvious, but very helpful to have your first step as you run the workflow be to clear out the Score field. In this way, you get a fresh score each time it’s run.

Second, and I can’t underscore this enough, is that I’m a visual person, so I needed to use Visio (or another planning tool if you have it) to lay out the path. If I could not see all the mutually exclusive options, and all the relative values, this would have taken me a LOT longer to accomplish.

The final thing I will say is that it’s helpful to add that opportunity score to many of the views your users (in this case salespeople) will be using to look at their records. That way they know If they have or have not run the scoring application.

Hopefully you’ve found this somewhat helpful; hit me up at bgeraghty@socius1.com or in the comments below if you run into troubles.